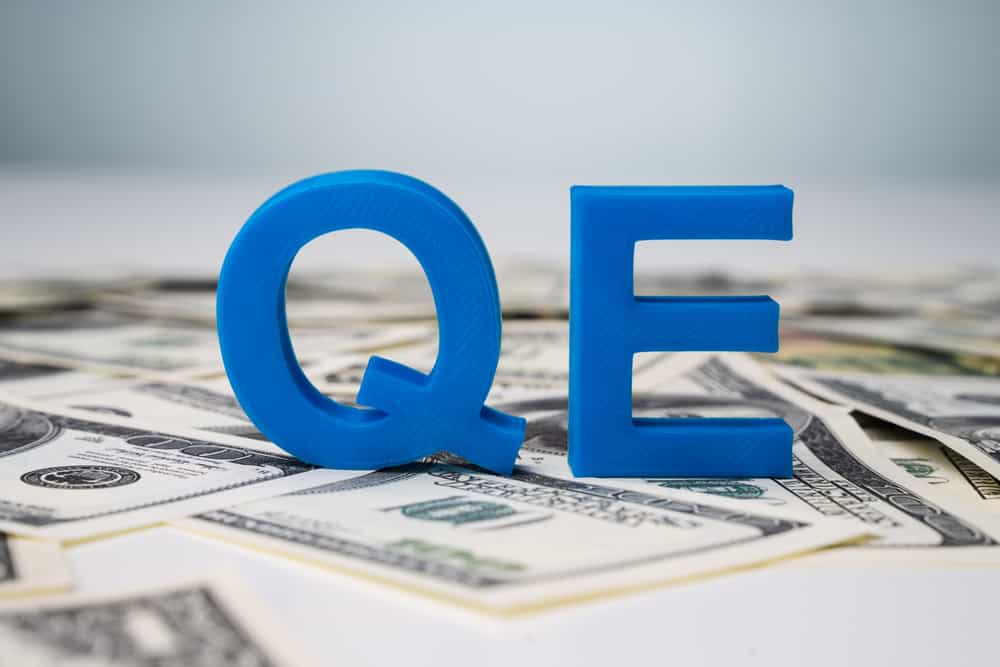 What is quantitative easing?

Quantitative easing (QE) is a monetary policy enacted by a central bank to increase the circulation of money in the country, thus stimulating economic growth. The agency does so by purchasing long-term assets such as government bonds from banks.

How does quantitative easing work?

During tough economic times, a country’s citizens get concerned about the possible loss of jobs. To stay afloat, they lessen their spending. Businesses record a reduction in clients, lower profits, and may even have to lay off some of their employees.

To deal with the situation, the central bank will act by lowering interest rates as a way of stimulating the economy. It is the government’s approach to entice you to spend more, borrow more, and expand your business. However, if the situation is still dire while interest rates are near zero, the regime may need to use a different approach. This prompts the country’s central bank to introduce a QE program.

Quantitative easing works by a central bank purchasing securities such as government bonds. Some people argue that this strategy is similar to printing money. While there is some sense to that assertion, the central bank is not necessarily availing new notes to the public. Instead, it uses financial institutions as the intermediary by way of digital money.

Through the purchased assets, the central bank increases the credit on the balance sheets of banks within the country. As such, they will have more than their reserve requirement, which is the amount that a bank should have in their reserve.

Subsequently, banks will be able to lend out more money to the public. Besides, loans such as mortgages, car loans, and business loans will be cheaper. Customers will increase their spending, hence increasing money circulation in the country.

At the same time, quantitative easing lowers the value of a currency. This attracts foreign investments and results in cheaper exports as a way to further increase the money supply in the country.

Bank of Japan: the 1997 Asian financial crisis triggered a recession in Japan. In an effort to stimulate the economy, the Bank of Japan (BoJ) initiated a QE program. In addition to buying government bonds, the central bank purchased private debts and stocks. While the efforts bore fruits between 2002 and 2007, the Great Recession erased the gains.

Bank of England: In August 2016, the UK’s central bank used the QE strategy to deal with the economic impacts of Brexit. The Bank of England (BoE) announced its plan to buy government bonds worth £60 billion and £10 in corporate debt. It was a move to curb a high unemployment rate, entice business investments, and maintain interest rates at a reasonable low.

Subsequently, the country’s gross fixed capital formation, which measures business investments, grew by 0.4% at a quarterly rate. While this was relatively low, some analysts have indicated that the situation would have been worse without the QE program.

Federal Reserve: In March 2020, the United States’ central bank tackled the coronavirus-induced economic crisis by initiating a QE program that would see it purchase assets worth $700 billion. Since then, it has expanded the program as a means to inject liquidity into the country’s financial system.