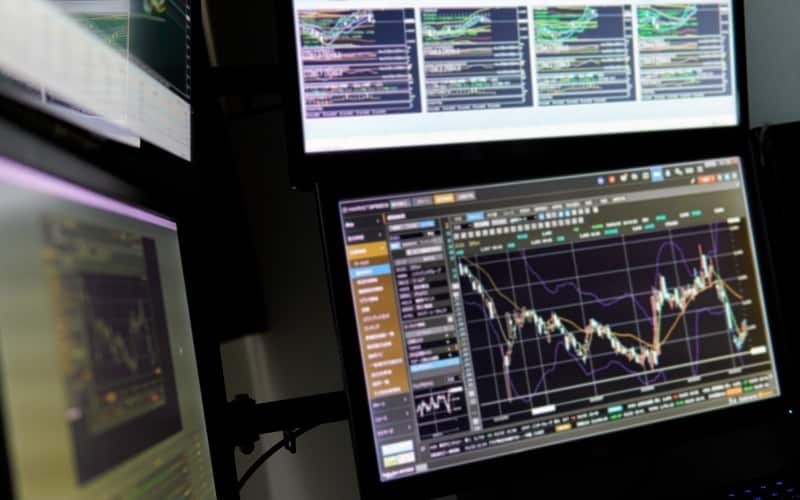 Descending broadening wedges are nonparallel price trend lines that slope downwards in a stock chart while broadening out. They depict a reversal from a bearish trend and open the way for a bullish upward breakout. The best patterns have long formations with a falling volume trend. This volume increases with time, although it begins at the bottom of the chart, especially in the annual price analysis.

The wedge-like formation broadens and consolidates out (in figure 1) in a downward direction as the price trendlines hit a sharp reversal upwards. Volume is seen to increase as the price action continues downwards. It is irregular as the prices rise above the upper section of the trendline. Figure 1 shows that the wedge forms in an intermediate-term change in the price trend and not in a generally bearish market.

The price moves in a bullish pattern from June to September. Prices rise from $16 to $27. The wedge forms in a short-reversal as prices trend lower after the downward breakout at $26 mid-August to September before rising again to $26 in October. The wedge begins from mid-September to mid-October before the sharp upward breakout begins.

Identification of the DBW

The descending broadening wedge (DBW) looks like a cone-shaped nonparallel trendline that is tilted or moving downwards. The slope downwards as the wedge continues to move downwards as the short bearish trend continues. The lower line is slightly steeper as they broaden over time. It is not parallel, thus cannot be termed horizontal.

The two opposite trend lines are required to have two distinct touches on either side as the downward movement continues—the volume of the price actions increases as the wedge forms within the pattern.

As earlier indicated, the breakout is upward, especially if the wedge-formed from a downward slope. It is mostly opposite the direction of the previous price trend.

The previous price trend, in this case, is a partial or short-term decline. The decline must begin when the prices hit a top trendline (in a bullish run) and then turn downwards. The partial decline precedes an upward breakout.

The descending broadening wedge (DBW) runs from January 16, 2021, to January 27, 2021 (11 days) before the upward breakout begins. After the trader spots the partial decline and the DBW, there is a high possibility that the downward price trend will soon be cut short as the commodity prepares to hit an upward run.

We should also consider that the previous price pattern can also be bullish before the descending broadening wedge is formed. In this case, the DBW will indicate a reversal towards a bearish trend (as seen in the figure below).

Figure 3: Bullish trendline before the DBW is formed

However, the formation described above (in figure 3) is not perfect, and the trader may term it as a failure. The movement of the prices is limited to 5% after the breakout occurs. The stock’s price will move in the opposite direction in most cases as it meets overhead resistance.

The descending pattern mostly appears in a short-term or intermediate-term bear or speculative market such as cryptocurrencies. It describes a reversal in many instances as compared to continuation trends.

The descending broadening wedge (DBW) is a downward formation that projects an upward breakout. Traders watch and target prices based on the wedge formation. To get maximum profit using this formation, the trader should place a stop-loss at a target that will trigger a sale rather than a buy.

How to Interpret the Head-and-Shoulders Tops Patterns

Broadening Bottoms Versus Broadening Tops. How to Use Them?

Forex vs. Futures: Which One Is for You?